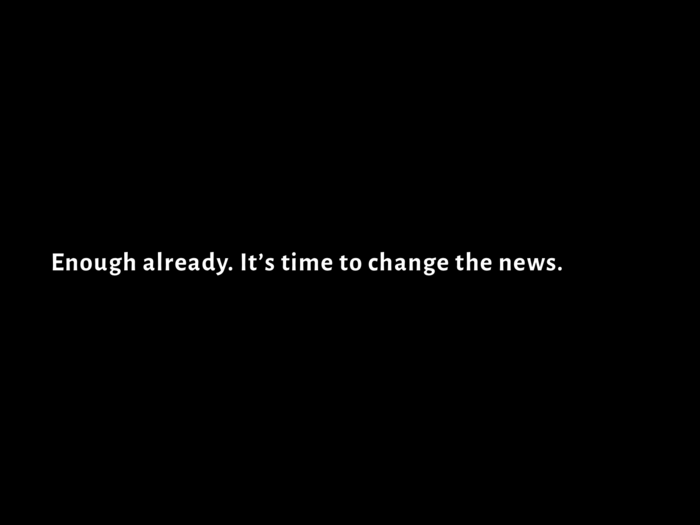 It’s time to change the news. No seriously, what we are consuming right now is not good for our mental health, our society, our democracy, our nature and our fundamental human rights.

Over the last few years, so many new news services have emerged in the scene, but they are still presenting us the news from the lens of politics or political party.

In India, I respect the kind of news shared by The Wire, Scroll.in and Alt News. They are doing some serious independent journalism. There is no doubt that independent journalism is the way forward. News can’t depend on advertisers, or else it will just serve the people with power and money. For this users will have to pay - either through a subscription service like Apple News+ or donate individually like how we are doing right now with Alt News.

So if advertisement and political affiliation is not the problem, then what is the bigger issue?

The bigger issue is what we consider as news. Let me explain this with a metaphor. A few years ago, in India, before Netflix, Prime video and other streaming services arrived, TV was severely broken. We considered all the shows made by Ekta Kapoor (Balaji Telefilms) and other similar over the top family drama to be our only choice. The argument that was given by the creators of these shows was that they are making these shows only because India wants to watch these shows and they are just fulfilling the demand.

Similar is the state of news today. A range of news outlets from highly commercial - Times of India to niche - Caravan Magazine are covering primarily political news or news of politicians. I have no problem with politics. It’s an essential piece in democracy (much like family drama in the genre of TV series), but it’s still a piece and not the whole cake.

There are so many topics we need to report on:

No one is covering these. And please don’t tell me that there is no readership of these issues or these are not important!

A letter to my future self (after JNU incident).

Hi Devesh, 25 years old. You are young. At this age, you are bound to have opinions about almost everything in life. That’s normal and natural. But forcing your opinion on someone is not a good habit. Most importantly, believing and... Continue →