Tek Fog: The story behind the story. 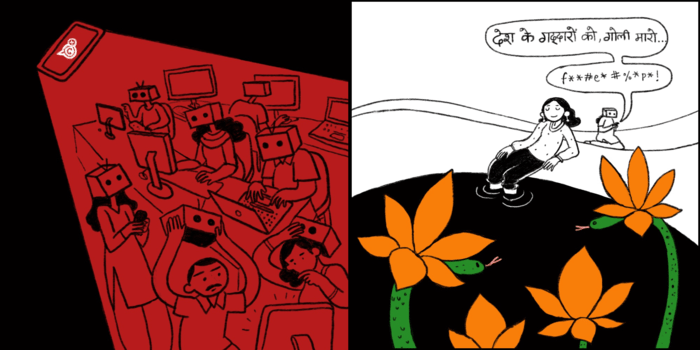 Ayushman and I have met only once outside a local market in Noida before the Tek Fog investigation. Because of COVID-19, we couldn’t meet after. We know little about each other, likes or dislikes, and have no common friends.

The Tek Fog story was out there for people to pursue. Many of us knew the scale and impact of social media manipulation. After I independently published a network graph that highlighted the BJP and Congress network in 2019, Ayushman contacted me to learn more and collaborate.

Around same time, I sat with @fs0c131y who created many network graphs of highly suspicious accounts in the BJP network and shared that with me on Signal. Many of them matched with my reports. At that moment, I thought we were onto something.

From that moment in 2020, I have monitored and archived around 85,000+ accounts almost every week and analysed their patterns. Later, in July 2020, I expanded the data archiving process to other social media platforms like Sharechat, Reddit India/Indiaspeaks and YouTube India Trends.

Every month my AWS bill is around 45,000-55,000 INR, just to do this archival process. Then there are additional costs to run algorithms on servers that helped us analyse this massive data. I did not know whether this process will lead me onto something until it did.

What is Tek Fog? Why does no one know about it, and if they know why it doesn’t appear in Google search? Ayush and I grappled with this question on WhatsApp chat before deciding to reach the source. The source was scared, had no trust in Indian media and was depressed.

Over time, we built their trust and waited patiently to send us proofs. The app worked only in a certain premise. So the source had to keep an eye and secure themselves before sending us anything. Slowly, one screenshot was followed by another screen recording.

Eventually, after eight months of building that trust and comfort, the source revealed their identity to us, shared bank statements with name and address and then followed it with a medical prescription that showed they’re treated for trauma. I called the hospital. They confirmed their identity.

We could’ve published the story at this point, but we waited. We then started locating independent sources at Persistent, Sharechat & BJYM. Many people said that they had seen some of these features in one way or another. But no one wanted to take that risk of searching and sending internal documents of this nature. They suspected Persistent will save logs somewhere and they’ll be at risk. Eventually, one person took that risk, went to the office of Persistent on a non-working day and shared the screens.

They got so scared that they decided not to go to the office for a week. We suggested them otherwise.

“They should go, else people might be suspicious.” - Ayushman stressed out.

This evidence became a key factor in our investigation - thanks to the courage of this one person.

But how do we independently verify many of these things? We asked ourselves this question in mid-2021 and then remembered that we were sitting on a gold mine of data that I archived for two years. The subsequent question was how do we make sense of this massive data.

That’s when we started filtering that data, involving a few coders in my friend’s circle, who committed two hours on this project for six months. (P.S. - I am a coder first, created two startups, part of Microsoft Ventures, created a solution for Dyslexia, Microsoft Regional Director, etc.)

We finally got everything that we needed somewhere in September 2021.
The Wire team discussed everything that we found repeatedly. Four editors edited the story, and we also chatted with a few independent experts to get these findings verified.

Today, all three parts of the stories are live and we want you to read and form your own opinions.

Ayushman keeps reiterating that it’s a human story more than a technical story. This is true because three of our sources showed courage to speak. They cared for the discourse of our society without thinking of the politics behind it. And Ayush and I invested so much money and time, without knowing the fruitfulness of the process. We thought no one will publish this. But we kept working.

We don’t want awards/recognition for it; We want you all to read the story. And share it with your friends, family and anyone else that you care for.

Yes, we are not traditional journalists. Yes, we don’t have a journalism degree. But we were invested in the story. We collected that much data with no end result in sight. We presented precisely what we found and what we couldn’t (rather than sharing an opinion). Most importantly, we reached our sources with care and empathy. If this is not enough, I would love to know what else we expect from journalism?

In this complete journey, Ayushman and I had disagreements, fights and moments where we didn’t want to talk to one another! But we stayed on the course because this was an important story to tell.

What a great friend I have found in him. 🧡 you Ayushman! #

Build Your Own Game (BYOG).

Highlighting the reasons why creating at least one game from scratch is essential for developers in general and front-end web developers in particular. In recent times, there has been a lot of emphases given to learning how to code. This... Continue →